From the love of Art at the early age of 6, Chef Peter Rios was destined to be a creative person. In first grade, he loved to sketch as his appreciation for good food  developed  his interest in Cuisine and Art combined.

He started his  formal training at Kendall College under the mentorship of Michel Tournier in the early 1990s. Tournier had his own bakery in Winnetka, IL and was Chef Rios first pastry instructor. While Chef Rios loved to cook at home,  the artistic exploration of pastry making truly took a turn when he realized it was what made him the happiest.

He likes to say that he did not “choose food but food chose” him, and prompted travels around the world for more training and pastry competitions.  Along his journey he incorporated flavors from Europe and the United States, inspired along the way by Pierre Hermé macaron ventures in the 1990s and collaboration with  Jacquy Pfeiffer later.

Pfeiffer, director of the French Pastry school, in Chicago, became a great source of inspiration and motivation when Chef Rios entered numerous prestigious Pastry Competitions. Rios placed third in the 2004 Food Channel Chocolate Challenge, and was a 2002 finalist in the Grand Prix of Chocolat in Paris, France. In 2001, he received the Gold Medal “Pastry Chef of the Year” Award and the Gold Medal “Best Taste” Award at the Patis France U.S. Pastry Competition in New York. 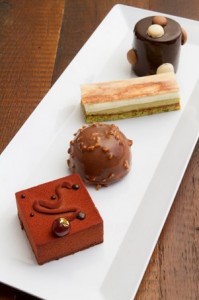 After crafting personalized desserts and pastry designs for Diana, Princess of Wales, various heads of state, high-ranking politicians and international   corporations, Chef Rios opened Alliance Bakery in Wicker Park, a Chicago neighborhood in 2007. Seven year later, he is now opening a pâtisserie in the heart of Chicago, walking distance from the Magnificent Mile.

Specialties include contemporary takes on decadent petits gâteaux, tarts, entremets and viennoiserie, which reflect the renowned pastry chef’s skillful techniques in fine pastries. Guests can enjoy expertly crafted gelée, mousse, praline, pâte sablés and meringue, along with Rios’ exceptional macarons and éclairs. Daily breakfast items include croissants in various flavors, as well as small salads and sandwiches served throughout the day. The new space will also feature a full espresso bar and coffee service by Chicago’s Bow Truss coffee roasters. All menu items will be made with locally sourced, fresh ingredients.

He wants to bring the classic French individual gâteaux to the heart of Chicago, combining traditional and modern French techniques. Among the classic French Pâtisseries we will find seasonally St Honoré, Paris-Brest and the famous Opéra, Religieuse will also appear on occasions. Pierre Hermé helped spark the rage of macaron innovation in the World uniting unexpected flavors, and Chef Peter Rios is adapting these techniques with local ingredients and traditional American flavors like “pumpkin spice” macaron.

On the picture above,  from the foreground of the photo to the background, you can see:

In the Fall, Chef Rios loves making an Oatmeal Brûlée, a twist on a crème brûlée. Get his recipe right here!

1/Always “respect the ingredient”, especially when you work with Chocolate. Always keep chocolate in an airtight container! And NEVER put it in the fridge or direct sunlight

2/Using the metric system is better. Invest in a scale.

It is no surprise that he loves to travel to other bakeries and try other pâtisserie. Among his favorites are: Tartine in San Francisco; unsurprisingly  LADURÉE in New York City; La Pâtisserie des Rêves in Paris, and Hugo and Victor in Paris, France.