To Find Fields to Farm in New York City, Just Look Up 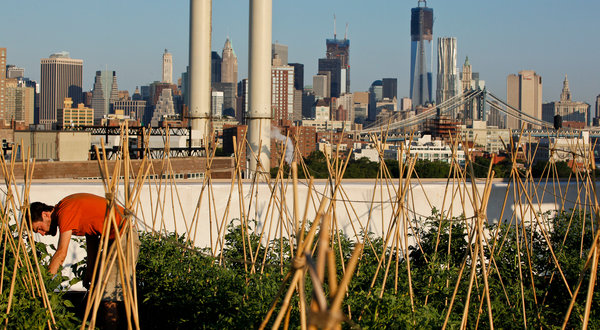 Ben Flanner of the Brooklyn Grange tending to a rooftop farm at the Brooklyn Navy Yard, where crops include pattypan squash and beefsteak tomatoes.

Back in the 1960s, Lisa Douglas, the Manhattan socialite played by Eva Gabor in the television sitcom “Green Acres,” had to give up her “penthouse view” to indulge her husband’s desire for “farm livin’.” 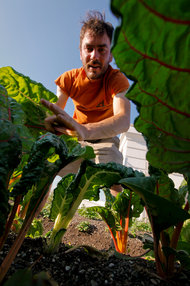 Mr. Flanner, the president and head farmer of the Brooklyn Grange farming operation, picked greens last week for a restaurant in Brooklyn.

Today, she could have had both. New York City (the stores!) is suddenly a farming kind of town (the chores!). Almost a decade after the last family farm within the city’s boundaries closed, basil and bok choy are growing in Brooklyn, and tomatoes, leeks and cucumbers in Queens. Commercial agriculture is bound for the South Bronx, where the city recently solicited proposals for what would be the largest rooftop farm in the United States, and possibly the world.

Fed by the interest in locally grown produce, the new farm operations in New York are selling greens and other vegetables by the boxful to organically inclined residents, and by the bushel to supermarket chains like Whole Foods. The main difference between this century and previous ones is location: whether soil-based or hydroponic, in which vegetables are grown in water rather than soil, the new farms are spreading on rooftops, perhaps the last slice of untapped real estate in the city.

“In terms of rooftop commercial agriculture, New York is definitely a leader at this moment,” said Joe Nasr, co-author of “Carrot City: Creating Places for Urban Agriculture” and a researcher at the Centre for Studies in Food Security at Ryerson University in Toronto. “I expect it will continue to expand, and much more rapidly, in the near future.”

For city officials, the rise of commercial agriculture has ancillary benefits, as well. Rooftop farms have the potential to capture millions of gallons of storm water and divert it from the sewer system, which can overflow when it rains. And harvesting produce in the boroughs means fewer trucks on local roadways and lower greenhouse gas emissions, a goal of Mayor Michael R. Bloomberg’s administration.

Community gardeners and educators have tended plots and grown food for years. But they have only recently been joined by for-profit companies intent on getting back to the urban land.

Gotham Greens began harvesting from its hydroponic greenhouse on a rooftop in the Greenpoint section of Brooklyn last year; it plans to open three more next year in Brooklyn, Queens and the Bronx. The existing operation, with 20 employees, grows bok choy, basil and oak leaf lettuce, and sells to retailers like Whole Foods and FreshDirect.

Brooklyn Grange, another farming operation, incorporated with the intention of finding a site in Brooklyn. But two years ago, a one-acre rooftop became available instead in Long Island City, Queens. The partners, led by Ben Flanner, the president and head farmer, spread out 1.2 million pounds of soil and started planting. This spring, Brooklyn Grange finally made good on its name, starting a second farm on a 65,000-square-foot roof at the Brooklyn Navy Yard, where more than 100 rows feature pattypan squash, scallions and beefsteak tomatoes.

Mr. Flanner pointed out two benefits to an agricultural aerie — plentiful sun and an absence of pests. “There are a number of parallels with regular agriculture,” he said. “What we don’t have are deer or foxes or rodents.”

One challenge: wind, which can whip between buildings and topple delicate seedlings. “We have to be clever to come up with solutions to reduce the amount of wind on the plants,” he said. “We do a lot of staking and trellising.”

Plans are in the works for even larger operations. In March, BrightFarms, which develops greenhouses near supermarkets to shorten the food-supply chain, announced it would create a sprawling hydroponic greenhouse on a roof in Sunset Park, Brooklyn, that is expected to yield a million pounds of produce a year. The chief executive, Paul Lightfoot, said the greenhouse would occupy up to 100,000 square feet, making it the nation’s largest such operation when it opens next year. (Recently, the company reached an agreement with the A&P supermarket chain to sell the Brooklyn produce.)

And last month, the city’s Economic Development Corporation issued a request for proposals for a 200,000-square-foot rooftop farm on a city-owned building on Food Center Drive in Hunts Point, the food-distribution hub in the Bronx. “We’re testing the marketplace,” said Seth W. Pinsky, the corporation’s president. “It was a logical place for a rooftop farm. If we’re successful at Food Center Drive, our hope would be to replicate this elsewhere.”

While there may be a veritable prairie of empty rooftops in the city, not all are suitable for growing crops, Mr. Nasr, of Ryerson University, said. Roofs must be strong enough to accommodate the weight of either soil or a greenhouse, and if they are not, strengthening them can be costly. Access is also a challenge, with some buildings lacking stairs or an elevator to the roof. Not all roofs enjoy full sun, with shadows cast by adjacent buildings. And neighbors wary of increased traffic and noise can be prickly.

“But in New York City,” Mr. Nasr said, “even if you eliminate roofs for all those reasons, you are still left with a large number that could be considered.”

The City Planning Department recently revamped the zoning regulations to encourage green development, including rooftop farms, and the City Council approved the changes. The new rules, called Zone Green, exempt greenhouses on nonresidential buildings from certain height and floor-area limits. Such structures cannot, however, exceed 25 feet in height and must be set back six feet from the edge of the roof.

Whether the relaxation of the zoning rules will unleash a flood of new proposals remains to be seen. None, so far, are planned for Park Avenue.

A version of this article appeared in print on July 12, 2012, on page A15 of the New York edition with the headline: To Find Fields to Farm in New York City, Just Look Up.

18 Responses to “In Rooftop Farming, New York City Emerges as a Leader”