I’ll never forget the first time I ever got an American cheesecake. I was in Providence, Rhode Island at Brown University Campus. Back then, food choices were average on my student budget. I then stumbled on a store offering some free cheesecakes. Being an inexperienced European, I thought the store was actually talking about some cheese. Yes you are allowed to laugh!  🙂 This is how I discovered the American cheesecake and how I loved it right away.

Returning to France I realized that we do as well have a cheesecake version called  “Le Fiadone”. It originates from Corsica, l’île de Beauté (literally meaning the beautiful island) off the coast of the French Riviera. It is a lemony cheesecake, not as thick as its American counterpart. I prefer to eat it in the summertime because of the citrus taste but you can definitely enjoy this recipe all year long if you want a light dessert after a heavy meal. It is crustless and an ideal dessert for gluten free diet since there is no flour whatsoever.

Traditionally, the cheese used is the Brocciu (a goat or sheep fresh cheese) and is hard to find outside of the Mediterranean shores. Ricotta cheese is widely used in lieu of the Brocciu and makes a perfect substitute. 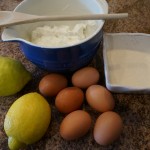 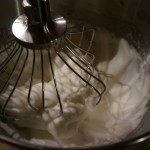 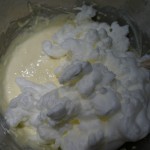 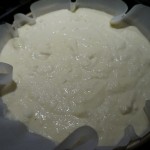 Line a pie pan with parchment paper. In a bowl, separate the yolks and mix them with the sugar and vanilla until it turns into a pale yellow color. Add then the Ricotta on a slow speed with the lemon zest. I like it very lemony, so I usually add the juice of one lemon.

Separately whip up the egg whites. When stiff enough, delicately incorporate the egg whites to the batter above. Pour in the pan and put in oven for about an hour. It is done when the sides of the Fiadone detach from the pie pan and take a beautiful golden hue.

Let it cool outside first and then leave in the fridge for a few hours. It is better served cool (but not cold). The texture can be crumbly so keep this in mind when serving.

Enjoy with your coffee, tea, fresh glass of lemon water or why not a glass of White Wine!